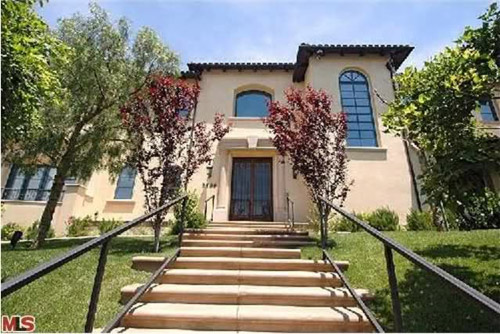 I saw somewhere that Avril originally wanted to build her own dream house, but she must have found one close enough because they paid $9.5 million dollars for a 3 story “Tuscan-style” 12,000 square-foot home on one half hectare of land.

(Picture is the front door to her new house)

Avril must like Tuscan-Style houses because she already has one in Beverly Hills that she is apparently selling for $6.2 million!

The pics below are from inside her OLD 6,864 square feet house with “only” 5 bedrooms and 6 bathrooms. 🙂

But their NEW house has 8 bedrooms and 10 bathrooms, plus an elevator, an office, a steam shower, a sauna, a pool, and a garage big enough for 10 cars!

I also read that her new house used to be owned by Travis Barker (former drummer of Blink-182) and his wife (at the time) Shanna Moakler and its where they filmed their MTV reality show Meet the Barkers – and MTV reported back in August they were putting the house up for sale for $8.5 million, and from everything I’ve read it has bounced between $8.0 and $9.5 million ever since.

UPDATE: I just read that Travis Barker bought this house in September 2004 for $6.2 million!

"Abbey Dawn" is Avri Lavigne's nickname and the name of her clothing
After learning that Avril's new clothing line is called "Abbey Dawn", I
January 2008 rumors that Avril was pregnant turned out to be something
See Avril interview her "Over the Hedge" character's dad, actor William Shatner,
Avril Lavigne is involved with MANY charities, and one she obviously supports
Go to Top