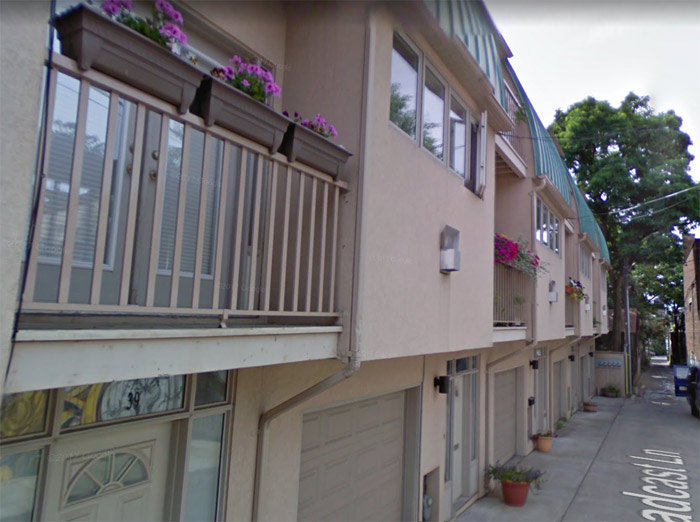 According to the Toronto Star newspaper, Avril’s Toronto home is up for sale…!

“…The biggest cultural export in the history of Napanee, Ont., is selling her Toronto home.

The asking price of $599,000 buys more than 2,400 square feet of prime Cabbagetown property in the form of a three-storey attached house with a Jacuzzi tub, private garage, sprinkler system and state-of-the-art alarm.

But 39 Broadcast Lane’s imminent change of hands also represents a departure for one of the country’s biggest stars. Ms. Lavigne and her Canadian fiancé, Deryck Whibley of Sum 41, own a home in Los Angeles’s ultra-rich Bel-Air neighbourhood.

Although the 21-year-old singer has been quoted in news media reports saying she’d prefer to raise her children in Canada, Ms. Lavigne’s latest career manoeuvres have been more U.S.-based…”

See a Satellite View of the House! (Notice the blue roof like the above photo here has!)

UPDATE: Now that Google also has Street View along with the satellite maps, it’s a little difficult to imagine Avril ever living here.. but it IS the correct address that the Toronto Star listed (and looks exactly like the photos they posted! 🙂

"Abbey Dawn" is Avri Lavigne's nickname and the name of her clothing
After learning that Avril's new clothing line is called "Abbey Dawn", I
January 2008 rumors that Avril was pregnant turned out to be something
Avril Lavigne & Deryck Whibley bought a new mansion in Bel-Air in
See Avril interview her "Over the Hedge" character's dad, actor William Shatner,
Go to Top