UPDATE – My original guesses below have been confirmed: Here it is, the origin of Avril’s nickname “Abbey Dawn”!

New OCTOBER 22, 2008 update: I just met Avril Lavigne this week IN PERSON and even got to talk to her for a couple of minutes!  And she was given a copy of the above linked article that talks about the origin of her nickname “Abbey Dawn”

This was at a Canon Canada press event where they invited 10 “Super Fans” to have a meet-and-greet with Avril after they announced this new partnership between her and Canon Canada. 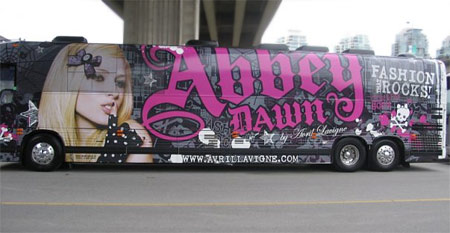 After learning that Avril’s new clothing line (coming out in July) is called “Abbey Dawn”, I found out that it was her nickname as a kid. And it appears that is the name of a place…

In a 2004 interview, Avril was asked:
“What was your nickname when you were in school?”And she answered:
“I didn’t have a nickname. Oh, yeah, I did — Abbey. Abbey Dawn. I think it’s a place. That’s what my dad called me, so all my friends did, too.”

So I’ve been checking around but don’t think I’ve discovered exactly what place Avril’s dad was thinking about (or maybe I did!). 🙂

There’s an Abbey Dawn Drive in Bath, Ontario that’s not too far from Napanee (like 5 minute drive or so?), but it’s pretty short… maybe the family knew someone who lived there? And BTW, I use to live VERY close to that road too! 🙂

And there’s an Abbey Dawn Road on the other side of Kingston (maybe 45 minutes from Napanee?) but it’s out in the country – not much there except maybe a Paintball field and a Tavern on the waterfront called “Schooners Restaurant & Bar” and “Smuggler’s Inn”, both at 907 Abbey Dawn Road where it meets Highway 2.

"Abbey Dawn" is Avri Lavigne's nickname and the name of her clothing
January 2008 rumors that Avril was pregnant turned out to be something
Avril Lavigne & Deryck Whibley bought a new mansion in Bel-Air in
See Avril interview her "Over the Hedge" character's dad, actor William Shatner,
Avril Lavigne is involved with MANY charities, and one she obviously supports
Go to Top