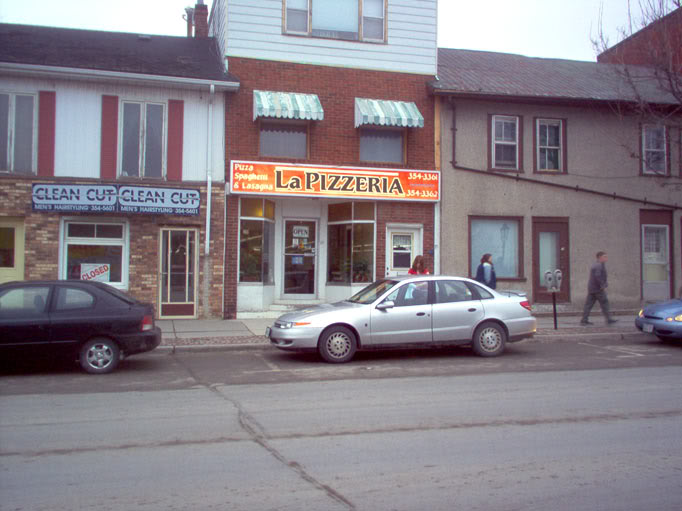 In the last post i was talking about signing Avrils guestbook. VERY BIG ! Not to mention it was the 6th book . Maybe she already has it ? Bill from La Pizzeria sends them to her whenever they get full so hopefully she’s read my message i left her. If you want to check out the picture of me signing it , it’s on my first page about visiting La Pizzeria.

When I was there Bill showed me alot of different pictures of Avril with him and his family at the restaurant and lots of pictures from the tour bus. She also got them VIP passes to the Juno Music Awards a few years ago too. Pretty cool – they’re ACTUALLY friends with Avril ! 🙂

I asked him about the fans that came into the restaurant and he said that there had been some from as far as AUSTRALIA and JAPAN! Another guy came in and asked what booth Avril ate pizza in, Bill told him every booth so the guy video taped himself eating pizza in all of the booth’s! Pretty funny stuff.

Another cool thing , When Avril was on the Jimmy Kimmel live show he phoned up Bill and asked him a few questions about Avril while she was there. He must have been surprised !!. Just after that they sent him a tape of the show, so he could hear himself on TV !

So if you’re travelling by Napanee, which is near Kingston, Ontario and between Ottawa and Toronto (about 3 hours from Toronto and 2 or so hours from Ottawa?), I would definitely recommend going into La pizzeria, the pizza is actually very good and well, Avril loves it !.

La Pizzeria is at 17 Dundas St in Napanee – only about 5 minutes away from the 401 highway, so it doesn’t take much time to get there if you’re already driving by. The picture at the top shows what the front of the store looks like – it’s on the north side of the street.

In the map below, you can zoom in and also get directions to get there by choosing “Directions” on the map and entering your address or starting place.

"Abbey Dawn" is Avri Lavigne's nickname and the name of her clothing
After learning that Avril's new clothing line is called "Abbey Dawn", I
January 2008 rumors that Avril was pregnant turned out to be something
Avril Lavigne & Deryck Whibley bought a new mansion in Bel-Air in
See Avril interview her "Over the Hedge" character's dad, actor William Shatner,
Go to Top