When I first heard that Avril Lavigne was coming out with her own clothing line named Abbey Dawn, I wondered where she found that name and later read it was a childhood nickname…

But the only reference I could find about it was in a 2004 Blender.com interview (site no longer exists) where Avril was asked by a fan:

“What was your nickname when you were in school?”

Then I remembered it was the name of a road I’d driven by just outside of Kingston (which is near Napanee) – and since roads are often named after people or places, I searched around to see where Abbey Dawn Road got it’s name…

After searching around Google for a while, I discovered “Abbey Dawn” was a real place created by a famous Canadian poet, Wallace Havelock Robb, who was born in Belleville (the same birth place as Avril) in 1888.

And as a poet, he held to the ancient tradition of the role of Abbé – more or less like a priest of ancient times – and became known as the Abbé of Abbey Dawn.

Abbey Dawn was not only a 500 acre sanctuary for birds (a bluebird sanctuary and maybe the very first sanctuary for “birds of prey” in North America), but also someplace Avril would fit right in since it was a gathering place for artists, poets, writers & all types of creative and spiritual people.

And in another coincidence that makes Avril’s nickname even more appropriate, Abbey Dawn was also well known for its large bronze bell (the Poet’s Bell) that was rung for important occasions like weddings and christenings… and the bell’s Ojibway Indian name was “Gitchi Nagamo”, which in English means “Beautiful Song”! 🙂

Here’s a photo showing the south side of Abbey Dawn, where you can see part of the large marsh that was part of the sanctuary and where an astrolabe (navigation device) was discovered that may have belonged to one of our most famous explorers, Samuel de Champlain.

Unfortunately Wallace Robb passed away in 1976 and although the property had been kept in the family for many years, it appears by the end of the 1980s his homestead had been torn down and all evidence of Abbey Dawn has since disappeared. 🙁

So it seems appropriate that Avril’s dad nicknamed her “Abbey Dawn” as a child, since it was a place for creative people – which no doubt included singers and musicians, along with writers and poets – and featured a famous bell that was named “Beautiful Song”.

Approximate Place where the Abbey Dawn sanctuary used to be:

About two and a half weeks after posting this, a celebrity website called “Just Jared” interviewed Avril and asked her: “Your clothing line, Abbey Dawn, was a nickname from your dad? How did he get that nickname?”

“He worked in Kingston, and it was like a street name or something. It was this area called Abbey Dawn and I don’t know. He just called me Abbey and Abbey Dawn. All my friends in high school called me Abbey, and when I first started out, my alias name was always Abbey Dawn in my hotel rooms, so it was something that stuck with me my entire life.”

So it sounds like Avril still isn’t completely sure what or where Abbey Dawn is or was – but knows it was an area called Abbey Dawn (the sanctuary I talk about above) and it is a street or (more accurately) a road called Abbey Dawn.

Hopefully she’ll see my post here soon and know all the history behind the source of her nickname… but until then, YOU know more about it than SHE does! 🙂

It was at a Canon Canada press event where they invited 10 “Super Fans” to have a meet-and-greet with Avril after they announced this new partnership between her and Canon Canada. There’s a Kingston Herald article about it here. 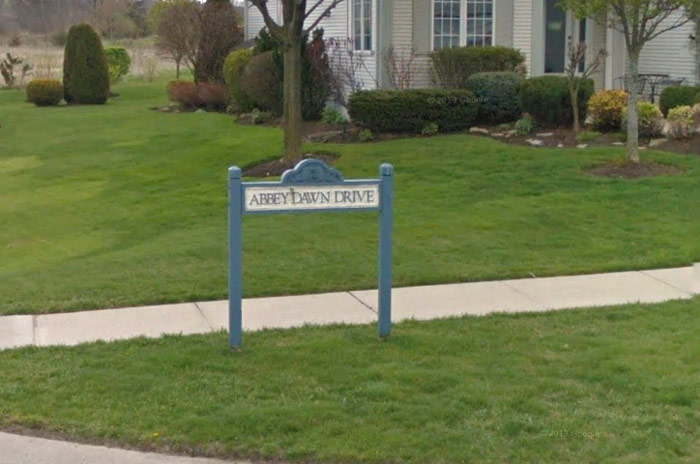 Also, my research here included not just Google searching but also getting a 1970 publication from the Kingston Historic Society that included an article called “The Abbé of Abbey Dawn” by George F. G. Stanley.

And I got valuable first-hand information by exchanging email with Klaas Tuinman who was a friend of Wallace Robb. And not only was a friend, but he had his own son christened at Abbey Dawn where “Gitchi Nagamo” was rung and Wallace Robb wrote the entire ceremony out with a quill on parchment paper! 🙂

You can read more about Abbey Dawn and Wallace Robb at Klaas Tuinman’s website called Dawn Cove Abbey. And also information on this webpage (an archived version, because original website is no longer online).

After learning that Avril's new clothing line is called "Abbey Dawn", I
January 2008 rumors that Avril was pregnant turned out to be something
Avril Lavigne & Deryck Whibley bought a new mansion in Bel-Air in
See Avril interview her "Over the Hedge" character's dad, actor William Shatner,
Avril Lavigne is involved with MANY charities, and one she obviously supports
Go to Top